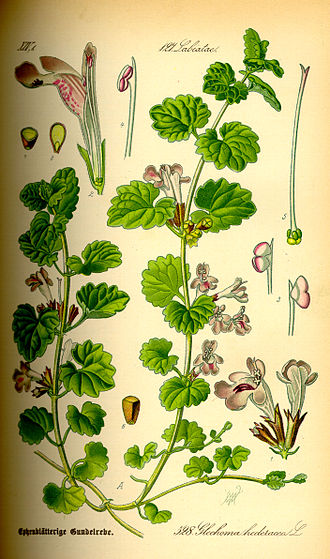 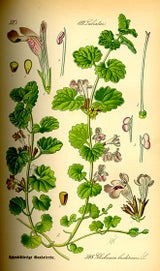 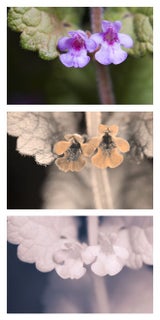 
Sold out
Add to Cart
Alehoof is used mostly in brewing as a clarifying ingredient.  It was widely used by the Saxons in brewing ale as flavoring, clarification, and preservative, and later by the English, before the introduction of hops into brewing which changed the ale into beer, in the late 15th century. Thus the brewing-related names for the herb of, tunhoof, and gill-over-the-ground.

Glechoma has been used in the cheese-making process as a substitute for animal rennet.

Traditional medicineGlechoma hederacea has been used in the traditional medicine of Europe going back thousands of years:
Galen recommends the plant to treat inflammation of the eyes.
John Gerard, an English herbalist, recommended it to treat tinnitus, as well as a "diuretic, astringent, tonic and gentle stimulant. Useful in kidney diseases and for indigestion." It has also been used as a "lung herb."

Its presence as an invasive weed in North America is the result of the value placed on it by European settlers as a medicinal herb and ale preservative; the species was imported and widely cultivated in herb and kitchen gardens. Other traditional uses include as an expectorant, astringent, and to treat bronchitis. In the traditional Austrian medicine the herb has been prescribed for internal application as salad or tea for the treatment of a variety of different conditions including disorders associated with the liver and bile, gastrointestinal tract, respiratory tract, kidneys and urinary tract, fever, and flu.

Safety
Although it has been used by humans as a salad green and in herbal medicines for thousands of years, the species is also believed to be toxic to livestock, particularly horses. Wild pigs, however, are reported to feed on it. Some accounts report it is toxic to rodents, while bank voles in Great Britain have been observed to use it as a food source.